This describes the technology of and background to the RX50 disk. Readership is Public.

The RX50 is a type of 5.25 inch floppy disk used in the 1980s as a portable storage medium for various DEC computers.

I have a collection of these dating back to those years and it is high time I ensured that the data they contain is safer than if I left it just there.

Illustrated is one of about 8 boxes of such disks that I have. In addition to these, I have other disks that came as part of software kits and other collections. There's quite a lot to get through, which is why I have procrastinated about them for so long.

For younger readers, back in the 1980s, a box like this was a common sight on desktops. For some personal computers, this type of disk was the only storage medium used. People had personal computers containing no internal mass storage at all. These boxes are a suitable size for storing optical disks like Audio CDs, while that technology lasts. 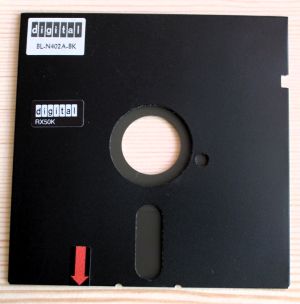 RX50 disks are single-sided 5.25 inch floppy disks with a storage capacity of 400KiB 8-bit bytes. The disk is organised as 80 tracks of ten 512 8-bit byte sectors. The track density is 96 tracks per inch. The disk case has a little window in it where the disk surface is accessible for reading and that window is only a little more than an inch wide.

I'm being pedantic about the numbers above because this was an era when computers had varying definitions of what a byte might mean. The first computer I used had 12-bit bytes and 60-bit words. Things seemed to go downhill from there for a long time.

The drives for these disks spun them at 300 rpm, provided a transfer rate of 250 bits/second and an average access time of 290ms.

These disks are superficially similar to other 5.25 inch disks used in IBM PCs, but they are formatted differently. Physically, the disks are actually double-sided but only one side is used by the DEC disk drives. They are formatted at a low level in a proprietary format and were normally purchased pre-formatted. At the time, I think it was possible to use a DEC Rainbow to carry out a low level format of these disks, but not a DEC Professional.

[1] Rainbow™ 100 Technical Manual. EK-PC100-TM-001. Digital Equipment Corporation. May 1984.
Gives a detailed technical specification of the hardware in a DEC Rainbow PC100. You can find this online at archive.org/details/dec-rainbow-100-technical-manual.